Raymund Ribay Gutierrez is just 25 years old, but has already received two nominations for Cannes’ Palme d’Or for his short films. Now he presents one of this year’s strongest debut features, winning the special jury award in Venice. His film has toured the most important film festivals this fall, and now it’s screening at WEEKEND.

‘Verdict’ is a lawsuit drama unlike any other. A story of domestic abuse told with a skyrocketing pulse and a strong, intrusive sense of necessity, portraying how an otherwise functioning justice system is undermined by poverty and patriarchal bureaucracy.

Joy fears her husband Dante each time he drunkenly stumbles home to their little apartment in Manila. She’s usually his victim, but this time he also turns violent against their 6 year old daughter. A battered Joy reaches out to the police, who refers her to their unit for physically abused women and children.

When Dante is arrested, the viewer follows both the perpretrator and his victims, as they are taken through emergency rooms, hearings and questionings and an impossible attempt at immediate problem solving.

‘Verdict’ is produced by Brillante Mendoza, and the confrontational style is clearly felt through this adrenaline pumping story, shaky handheld images and a documentary-like curiosity and attention to detail. As night becomes day and days become weeks, Gutierrez slowly paces the film. The seemingly crystal clear case is muddled by procedures and legal subtleties, which go unnoticed for Joy and Dante. Both Maxene Eigenmann and Kristoffer King bring their own vulnerable and aggressive desperation as victim and abuser in this story that never settles in its 126 minutes of thrilling suspense and highly observant wonder about a legal system that fails, even when it works. 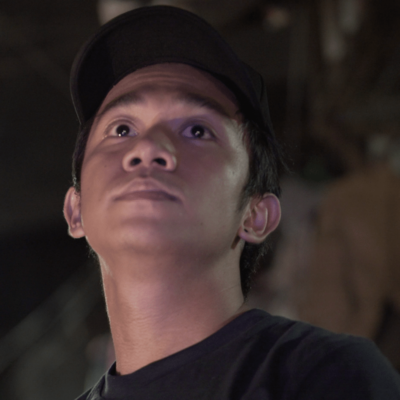 “Domestic violence is the most prevalent form of abuse in the Philippines. The cost of pursuing a case in the Philippines is astronomically high for an average Filipino. What I am trying to show in the film is that sometimes equality in litigation leads to a more complex procedure that in turn results in impunity for the perpetrator. Orderly judicial procedures are important, but if they are the only focus, they threaten to pervert the justice they seek.”