Newzealandic Taika Waititi divided audiences, but won the Audience Award at Toronto International Film Festival for this satirical comedy that exposes hate, nationalism and blind loyalty, encouraging us to think for ourselves.
Empire Bio
Tickets
Udsolgt

Mel Brooks once said, that if you can laugh at Adolf Hitler, you’ve won. Ridiculous characters are rarely intimidating and satire can be a great tool for exposing the absurd and handling the monstrous.

Taika Waititi has his own take on humor in films like the debut ‘Eagle vs. Shark’ and the vampire spoof success ‘What We Do in the Shadows’, and after he proved his commercial potential with the Marvel-movie ‘Thor: Ragnarok’, he was free to pursue his wacky idea for a comedy about a young fanatic fascist and his invisible friend, Adolf Hitler.

The war is nearing its end in the German town Falkenheim, but for 10 year old Jojo it’s only just beginning. He has come of age and joined the Hitlerjugend. He’s feeling honored and anxious, but luckily his invisible buddy Adolf (played by Waiti himself with a fake moustache and a heavy German accent) helps him muster up the courage. Alas, even Hitler can’t protect him against the danger in the attic, where his mom (Scarlett Johansson) has helped a Jewish girl, Elsa (Thomasin McKenzie), hide out. But Elsa looks nothing like the child-eating monster he’s heard of in the propaganda, and soon the little nazi must realize that his worldview is wrong.

‘Jojo Rabbit’ is an allegory on the consequences of letting prejudice, fear and fake news rule instead of making up your own mind. Frighteningly relevant in all its vividness and with an entertaining fortitude from the whole cast, including Sam Rockwell, Stephen Merchant and its soundtrack blasting Bowie and The Beatles. In German, natürlich! 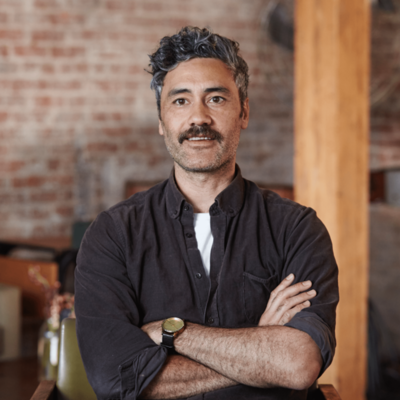 Taika Waititi is an award-winning screenwriter, director, actor, and a New Zealand national treasure! He is best known for directing the critically acclaimed blockbuster ‘Thor: Ragnarok’ for Marvel, which made over 850 million dollars worldwide, as well as for writing and directing the feature films ‘Hunt for the Wilderpeople’, ‘What We Do in the Shadows’, ‘Boy’ and the Oscar nominated short ‘Two Cars, One Night’. ‘Jojo Rabbit’ premiered at Toronto International Film Festival, winning the Audience Award.

"I experienced a certain level of prejudice growing up as a Māori Jew, so making ‘Jojo Rabbit’ has been a reminder, especially now, that we need to educate our kids about tolerance and continue to remind ourselves that there’s no place in this world for hate. Children are not born with hate, they are trained to hate. I hope the humour in ‘Jojo Rabbit’ helps engage a new generation; it's important to keep finding new and inventive ways of telling the horrific story of World War II again and again for new generations, so that our children can listen, learn, and move forward, unified into the future."