Some say that secrets keep a relationship alive. But rather, they are slowly killing it in Ivan Elmer’s mysterious debut.
Empire Bio
Tickets
Udsolgt

André (Niklas Herskind) and his new girlfriend Elisa (Ida Cæcilie Rasmussen) are pregnant. They are in their honeymoon phase, in love and full of hope when they move to the countryside, where Elisa grew up.

Soon André realizes his dream of starting a micro brewery and things seem to be looking up for the little family. But rather than bring the lovers closer, Elisa’s pregnancy is tearing them apart. She starts showing her true color and engages in behaviour completely foreign to André as disturbing details from her past arise. André is convinces that she is experiencing some kind of psychosis and finds himself in a web of lies spun by Elisa herself and her overprotective mother.

‘Blurred Vision’ is a psychological thriller, and Elmer shifts between veksler naturalistic and ever more abstract imagery, blurring reality and making space for the dark sides of love.

The slow unravelling of reality underlines the physical and psychological changes of a pregnancy.

The crew utilized Ida Cæcilie Rasmussen’s real life pregnancy in pre-production and decided to let her physical and mental transformation inspire the character in the development of the script. This highlights the authenticity in a film that is impressive in its psychological depth, effective tension and strong production. 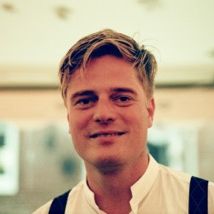 Ivan Elmer was born in 1983 in Copenhagen, Denmark. After having travelled in South America, Elmer began studies at the European Film College in Ebeltoft. His next stop was at the photography school Fatamogana and afterwards the improvisations school ImprovOlympic in Chicago. Then his work in film started to take off, as he worked on his brother’s productions as assistant director. Since 2010 Elmer worked as a director on his own three short films alone; ‘You Lead, I Follow’ (2011), ‘Johannes Vilhelm’ (2015) and ‘The Last One’ (2016).

“Blindly trusting your partner is a frightnening thing. But the secretive mistrust can develop in deeply uncomfortable and unforseeable directions. Or at least, that's my experience. This is where we found the core story back in 2016. It was important to me to dive into the pitfalls associated with secrets, lies and fear in a relationshop. The paradox of being an individual having to coexist in a symbiotic relationship only becomes more complex when a third person - a baby - is included."